We wanted to tell you a little about our older son Joseph and why he is now with our family in a heavenly way.  Joseph, our oldest son, was a gift from heaven when he was born on Wednesday, November 27, 2002, at 4:51 p.m. He was born the day before Thanksgiving and we called him our early turkey.  We were so thankful for him and still are today.  Joseph always loved his family and always said that it was great to be a part of this family and that he was so thankful that mom and dad got married so that he and his younger brother could be born. Now with our two gifts from heaven our lives were complete and full of love.

I faithfully kept their baby books full of endless pictures to and beyond their first year of life, writing down special things they both would say and do, and still do so even today.  Those precious notes are called their Memory Books and each would say, “Mom make sure you write this down so we can remember it.” I wrote down what they asked me to and so much more and am so grateful that I did.  Each note in their memory book opens a chapter in my mind of memories that are precious and much of those special things they said are captured in those books and not in a photo or video.

Joseph said so many things after looking back in his Memory Book about Jesus since he was 6 years old as well as after he was diagnosed with a brain disease on January 24, 2014.  The day of his diagnosis brought me and my husband to our knees and was the worst news any parent could hear. 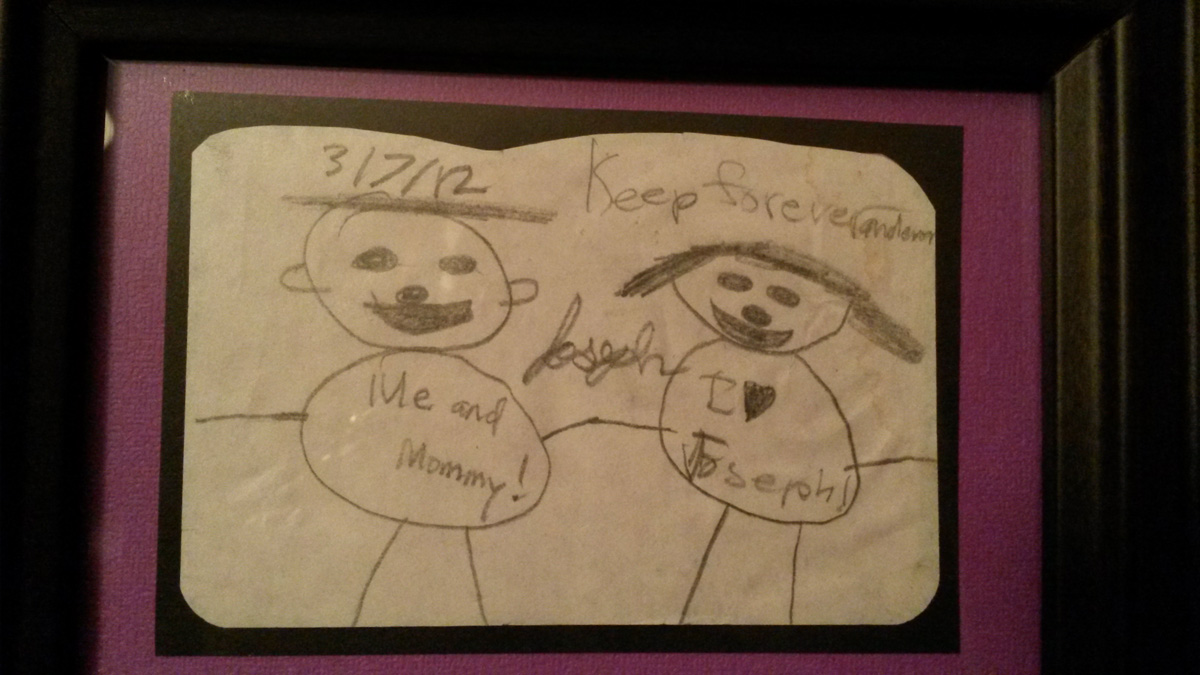 Joseph loved to read, do math, play baseball, watch the Red Sox, watch his favorite movies with popcorn and chocolate chips, eat Mexican food and pizza, drink hot chocolate, play with his Hot Wheels cars, draw chalk roads on the driveway, play the piano, ride his bike and scooter, swim in our pool, spend time in Lake Placid, play Wii, play Rock Band, play elevator, play church, write and draw his own stories, swing on the swing, walk, take wagon rides, write music and lyrics about God and his family, and always be with his family.

He talked about God all of the time especially since he was 6 years old.  He put God into everything he said and did.  He played church and was “Father Joseph” when he was in elementary school and then was so excited when he was able to be an altar server at our church. We believe he had a very special connection with Jesus his entire life!

We received a second opinion from a behavioral optometrist who after intake paperwork and an examination showed that light therapy and eye training could improve his vision.  I desperately sought out a local pediatric neurologist that was highly recommended and finally got an appointment in October.  All paperwork along with our own concerns and the school’s concerns were sent.

I received a call from that neurologist’s office and I was told by their office that “the neurologist was not going to see Joseph because it sounded like his issues were behavioral” but I knew something was wrong and I continued to seek another pediatric neurologist who gave us an appointment, listened to our concerns, and scheduled an MRI for the earliest date possible at any location which was January 24, 2013.  On this date our sweet Joseph was diagnosed with a terminal brain disease.

We saw a specialist in Boston, conferred with another specialist in Minnesota, as well as other specialists in the United States and France.  After sending Joseph’s paperwork, blood work, and MRI report we were told that this particular disease was not treatable at the stage it was found and could expect 6 to 12 months more of Joseph’s beautiful life.

First, this disease of childhood X-ALD affects approximately 1 in 20,000 boys.  Second, NYS passed a law mid-summer 2013 that all newborns would be screened for ALD, prior to this even if a parent had genetic testing done, due to its rare occurrence, ALD was not one that was tested for.  Third, ALD is identified if either you have a family history (which we did not), another sibling who has passed away from the disease, or you get a concussion or sports injury and have an MRI done and it is detected very early.  Fourth, by the time a child shows symptoms of ALD it is too late to treat, as in Joseph’s case.   Therefore, unless these circumstances occur for it to be detected, early bone marrow transplant is not an option at all.  Even if a parent chose to proceed with a bone marrow transplant anyway, it would speed up the disease progression and result in either the child being in a vegetative state or death.  Fifth, approximately 95% of time X-linked ALD is from the mother and her DNA make up which she unknowingly passes to her child. After having my DNA and my other son’s tested, neither of us carry the gene for X-ALD.  They said that this is rarely ever the case.  I was told that by the expert we saw in Boston that in 5-7% of cases they call it a de novo mutation.  That means in 5-7% of the cases of X-ALD there is no link to the mother and it is considered a random, unexplained, unfortunate occurrence.

Over the course of 2013 Joseph gradually lost skills.  In the middle of April 2013 he completely lost his vision.  In April and May of 2013 his ability to speak became one or two words at most and by late summer and fall it became vowel-like sounds, crying at times, and thankfully smiling and laughing.

By November and December of 2013 his walking declined significantly until he was unable to handle more than transferring into his indoor swing, his adaptive chair for meals, and his bed.  His hearing and comprehension continued to decline but we truly believe he could still hear mom, dad, his brother and those he loved and knew best until his last day with us.  His sense of smell became very heightened and he would smell mom, dad, and his brother and at times would say our names and have a big smile on his face after smelling each of us.  He liked to hold one of our hands especially at mealtime and bedtime and always did his best to put his hands together for prayers before each meal.

On February 1, 2013, at 3 a.m. he had a significant seizure which we were told at the hospital showed that his brainstem hemorrhaged outside of his skull.  He received a PIC IV line for hydration and spent what his brother called Joseph’s “five bonus weeks” at home surrounded by us listening to favorite stories, movies, and family video and most importantly being surrounded with endless love.

We always said that we would always do the best we could as a family and that’s what we did.  We loved each other, stayed as happy as we could, and made the days count instead of counting the days we had left.  Joseph was so brave and his brother truly was the best brother ever and was even given a framed official Best Brother Certificate from our Town for his endless acts of love, loyalty, bravery and courage for Joseph.  We went on our Make A Wish trip to Give Kids the World Village in Kissimmee, Florida and had the best week of our lives.  With the help of close family, close friends, Father Anthony Ligato and our dedicated church family we were hugged in support, help, and love to make our days filled with love and joy.  We cannot say thank you enough to Dr. Porter at the Journey’s Program with Albany Medical Center Hospital, Dr. Wayne Hogan, and our core team with Hospice, all who walked with us daily to move heaven and earth to ensure that Joseph had the best care filled with love.

Joseph went to heaven at 8:23 p.m. on March 7, 2014, with a smile on his face and we will remember and love him forever.  Joseph brought endless joy to our family and he used to say “It’s so great being a part of this family!” and when asked in February 2013 what his best day ever was, he said with his arms stretched high “All the days!”  All of the days were certainly a gift and joy that we as a family will always treasure with Joseph!  We set up Joy From Joseph, Inc. in honor of Joseph to keep his memory alive to help other children facing life threatening diseases and terminal illnesses in our local community with a memorable day when it is needed most.

Later, we decided as a family that out of Joseph’s devastating loss we wanted something beautiful to happen which resulted in our third son being born from our hearts.

Jesus said, “Let the little children come to me, and do not hinder them, for the kingdom belongs to such as these.” Matthew 19:14